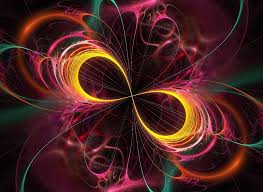 Can an ideology/philosophy be infinite in nature if it has limits within it's ideologies and philosophies? The answer of course is no as all limitations are of the finite and not of the infinite, infinite simply refers to which that is limitless where's finite refers to which that is limited. Do we want to be governed by what is finite or infinite in nature? Considering that human consciousness is limited and that divine consciousness is limitless, we need to make a choice which one we want or even need to be governed by.

Is it wise to be governed entirely by an ideology/philosophy that is infinite in nature while existing in an existence that is governed by finite consciousness?

The following are my replies to other people on a forum, life can be limiting or limitless, this is our choice.

I don't faze you do I I Spirit 3, I respect this; you simply just go with the flow within the present, in my mind quite commendable.

Yes, I suppose so, is love and light a creation from it's opposite making the opposite just as worthy as love and light or visa-versa.  I suppose motion works like this, action reaction, push and pull, cause and effect. I was speaking with a Malaysian bloke for some time on and off, he often mentioned the natural flow of the  push and pull effect of motion, my western mind had a hard time comprehending where he was coming from at times but in all it made sense to me.  He basically said all we need to do is get off the treadmill for all motion creates delusions to one extent or another.

I simply concur, everything is of and comes from spirit/consciousness.

It's indeed all natural but I can see that it might not seem that way as well.

Do we need to plan therefore control?  I think the ego needs to plan where our divine self doesn't, what is there to plan when you are everything and are aware of everything?

In my mind, we need to be caring thoughtful of the ego without being controlling, I often think of the ego as my child that needs my loving attention to become aware and adult in it's motions, otherwise it's going to be and act in a self-cantered way like a spoilt brat. I think our present reality shows this.

I think treating the process of love and light as a be and end all is a huge mistake as it's still apart of the process of control. I have spoken to a number of Eastern minded people on this, they all say all we need to do is release ourselves from this control, from this process, to be our whole self. Let's be honest, love and light is still about taking control rather than releasing it. I think the Western mind has a huge problem in comprehending this; it's probably why so many Western minded people are upset with me in what I write, I'm simply seen as a threat to the process of control.

My stepdaughter Karla has won three world titles in a row now; it's a world record in women's IPSC shooting. We guided Karla rather than controlled Karla.
Posted by Mathew Naismith at 08:32 No comments: