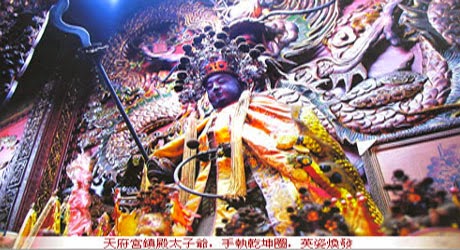 I thought I would share the following about a legend that is taught to Asian children to do with how our illumination will cast a shadow giving us a perception of darkness. This came to my attention by a person of the name of Fira Angel in reply to my last post titled Creating Darkness Through Our Own Illumination.

Wiki
Nezha (哪吒), also known as Na-zha (Na-ja) or Nata, is a Taoist protection deity, originally of Chinese Buddhist mythology. His official Taoist name is "Marshal of the Central Altar" (中壇元帥). He was then given the title "Third Lotus Prince" (蓮花三太子) after he became a deity.

Fira Angel:
This is a truth taught to many children in Asian countries through the legend of NeZha. When he was possessed by a demon, he said that in the infinite space of hearts, there is always hope, therefore, complete darkness is not possible, yet light casts shadows, meaning that darkness must exist. He says that it is something we must live with. ﻿ 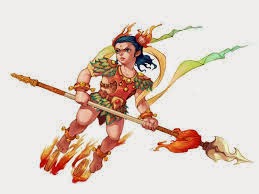 This seems contradictory, one minute it’s saying complete darkness doesn’t exist and then in the next line it says it does, so which one is it? A lot of spirituality seems to be like this, contradictory, but only because we don’t read between the lines and when we do we might not understand completely what we are reading.

When illuminating at our best and we come across people who are less illuminating and we are unable to illuminate these people to our own energy field, what is this telling us? We are not illuminating enough to change the shadow before us, we are still in most parts apart of this shadow.

The strange thing about illuminating others is they, at times, are quite unaware of this mainly because they can’t see your illumination, however if they are aware they too are of this illumination to an extent depending on how much a part of the shadow they still are. In my last post I mentioned a serial killer who is unable to see other people’s illuminations, that is why they feel no wrong in what they do and even if they did feel wrong it wouldn’t stop them from committing such crimes. Can these people be affected by someone who is illuminating with very little attachment to the shadow? Yes most definitely that is why some people can get through to them and others can’t.

This brings me to the times I expelled ominous entities trying to disrupt me on more than one occasion, I just laughed at them and they just went away in terror on their faces. The reason for this terror is they believe, like we do, that darkness exists therefore evil exists and because they perceive this they carry this out creating a reality of terror for themselves and others.  Not realising this at the time, I became illuminated which showed these entities they are not of the dark as they presumed/perceived.

If you perceive darkness exist evil intent will exist within this perception as long as we believe this, however once you begin to realise true darkness doesn’t really exist and is only a shadow cast by our illuminations, you will illuminate all before thee in turn creating a reality of light instead of perceived darkness.
Posted by Mathew Naismith at 08:52