Creating Darkness Through Our Own Illumination 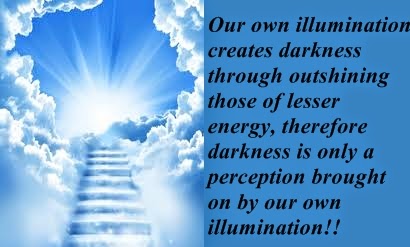 Switch off the illuminating effects of the universe, what do we have?  We still have energy and all energy emits some kind of light otherwise it couldn’t exist, true darkness just can’t exist as the following links will try to explain. Can we perceive darkness?  Most definitely, what I am saying is darkness is a perception not a reality to assist us to learn about ourselves.  How would we become aware of ourselves without darkness but this doesn’t mean darkness actually exists, I believe it’s only a perception we have to help us learn about ourselves.  You could almost say it’s an illusion but I believe all perceptions exist in some way as all thought are energy; all energy exists so perceptions are not a true illusion in my mind. Actually illusions can’t exist because they are still an energy source.

Because we are illumining so much we create darkness through this illumining effect by out shining other energy forms which we now perceive to be dark because they are not illuminating like us. We are indeed defusing other less illuminating forms/sources of energy thus creating darkness but of course this is only a perception brought on by our own illumination.

Extract: Is there such thing as true darkness? The answer is: no, not in this universe.  Our universe is flooded with radiation (light) and matter (particles) of all descriptions and energies, pretty much anywhere you go.

Extract: The team believes that the interactions between dark and ordinary matter could be more important and more complex than previously thought, and even speculate that dark matter might not exist and that the anomalous motions of stars in galaxies are due to a modification of gravity on extragalactic scales.

I think it’s absolutely great to realise darkness just doesn’t exist except within our own perceptions, everything around us that seems dark isn’t dark it’s just we outshine them making them look dark. Perceiving dark to me is a very good sign we are more illuminating than lower energy forms/sources.  You just wonder what other far more illuminating formes/sources of energy we can’t detect because of our own low energy emissions.  Do serial killers see other people who are far more illuminating? Actually no, otherwise they wouldn’t be able to kill; I believe the illumination of others would stop them. How would we then be able to detect other energy forms/sources that illuminate far greater than ourselves?  It stands to reason we wouldn’t however having the understanding that there is no darkness just might make you illuminate even more to detect other energy forms/sources that illuminate more than we.
Posted by Mathew Naismith at 12:51