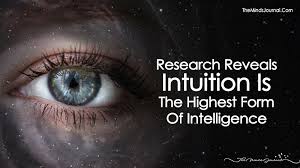 The ego is exceptionally versatile and adaptable, with the ability to be conditioned to just about any circumstance or environment. I suppose this is why humans are able to adapt to various environments, as depicted in human history. Ego is simply a conscious aware of one's own existence or being or even importance. One example of this is being aware of our own importance to our children, each other or society as a whole, of course egotism, which is an exaggerated opinion of our own personal importance, is something else.

Often intuition is thought to be a feeling we get that something is presumed to be the case, an assumption purely based on feelings. When you actually condition your ego to become less desiring therefore more intuitive, intuitiveness takes on a different meaning. Intuitiveness is no longer just a feeling but an awareness. The less desiring we become, the more aware we become.

Desire is more to do with an ego conditioned to egotism. Yes, as we can condition our egos to desire, we can condition our egos to an environment of egotism. Actually, both desire and egotism go hand in hand, one not being able to exist without the other. To become egotistical takes desire as to desire takes egotism. Even if we desire to help human kind, the desire of even being seen to help creates egotism, an exaggerated importance. How many people today desire to be seen helping human consciousness?

Intuition on the other hand has nothing to do with desire. Try truly becoming aware without the things we don't desire to become aware of or feel. Intuition has no preference or desire; this means anything from hate to love, conflict to harmony, negative to positive, and so on, the ego can intuitively become aware of. In other words the honest truth is presented to the ego through intuition, not a desired truth, a dishonest truth. What ego conditioned to desire wishes to become truly aware or intuitive? It can't occur because our desires take control of the ego, conditioning the ego to desires rather than intuition.

You can desire one moment and become intuitive in the next moment, remembering that the more we desire, the less intuitive we become.  When we desire, this is often in the absence of intuition and visa-versa. We will often only perceive through desire what we will experience, not what we will actually experience.
The following doesn't totally endorse what I have stated here but they are an interesting read, in my mind anyway.
https://www.forbes.com/sites/investor/2018/06/23/is-intuition-a-form-of-intelligence/#fb12c1715fdc

Posted by Mathew Naismith at 17:35