In the Presence of Wisdom 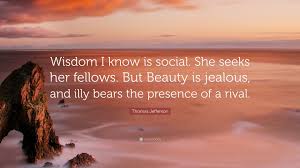 Wisdom I know is social. She seeks
her fellows. But Beauty is jealous,
and illy bears the presence of a rival.
~Thomas Jefferson~

As it is said from a Jewish view point, "Wisdom is the perfection of knowledge of the righteous as a gift from God showing itself in action. In direct relation to God, Wisdom is with God from all eternity." Source: https://en.wikipedia.org/wiki/Book_of_Wisdom

Posted by Mathew Naismith at 08:49