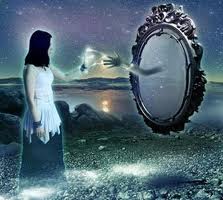 It's wise to be a aware that a controlling ego (egotism) will state which one is absolute over all other beliefs, any belief that is egotistically free, won't state which one is absolute over another. It's also wise to be aware that there is a big difference between ego and egotism, egotism being an ego in control, ego is just being. Each belief system is of the ego, it was created by ego, this means each and every belief system is of the ego to start with, basically, everything of creation is of the ego, however, not everything is of egotism.

If your not bias (egotistical) within your own beliefs, you will find the following various views from different beliefs quite interesting. They basically say the same thing even though the interpretation of ego varies in regards to certain beliefs. There seems to be a cohesive view that ego can give us the illusion of separation from, nothingness, God, zero point, oneness, inner self, our truer being and so on.
_____________________________
Zen
https://newearthpulse.wordpress.com/2013/04/19/zen-and-the-ego/

Extract: “The anitya doctrine is, again, not quite the simple assertion that the world is impermanent, but rather that the more one grasps at the world, the more it changes. Reality in itself is neither permanent nor impermanent; it cannot be categorized. But when one tries to hold on to it, change is everywhere apparent, since, like one’s own shadow, the faster one pursues it, the faster it flees.
Hinduism
http://www.spiritualresearchfoundation.org/spiritual-practice/steps-of-spiritual-practice/how-to-reduce-ego/what-is-ego-definition/

Extract: From a spiritual perspective, ego means considering oneself to be distinct from others and God due to identification with the physical body and impressions in various centres of the subtle body. In short ego is leading our life as per the thinking that our existence is limited to our 5 senses, mind, and intellect and identifying with them to various degrees.
As per the science of Spirituality, our true state of existence is identification with the Soul or God-principle within us and living our day to day life with this consciousness. As the one and same God-principle exists within all, from a spiritual perspective there is unity in all Creation.
However, depending on the level of our ego, we identify with the God-principle within us, i.e. the Soul to varying degrees. If our ego is high, we identify less with the Soul or the God-principle within us.
Taoism
http://personaltao.com/ego/

Extract: In Taoist practice, when one “sheds the bones” a Taoist will finally fully wash off all the glue that holds the spirit to the bones of our stories. However, until that point of full release, a Taoist allows ego to play a bit, as it’s part of our very nature. Instead at first a Taoist learns how to live their life without that sheep dog in control of our life.

Extract: [Quran 2:54] Recall that Moses said to his people, "O my people, you have wronged your souls by worshiping the calf. You must repent to your Creator. You shall kill your egos. This is better for you in the sight of your Creator." He did redeem you. He is the Redeemer, Most Merciful.

The following gives a more collective view, it also shows a Christian and Judaist viewpoint on this topic as well.

Extract: Understanding what we call ‘the ego’ will change how you see yourself and the world around you. Your mind has been programmed to believe that the ego is you, but in reality it is just an illusion that we use to help us function in our world. In a sense, the ego is what makes us feel separate from other people.

Even though we play much of our life through the lens of the ego, we are not the ego. We are sitting outside of the ego; a pure and whole individual. We are the observer. Although the ego is in no way the enemy, the ability to see the ego for what it is gives us a lot of power and enlightenment.

Let's put this in another way, how much of the inners self or nothingness is a persons when stating absolutes in relation to their own beliefs? Considering that absolutes within anyone's belief system is egotistical, how virtuous and exact is any absolute view in this case when they are themselves obviously showing no connection  to their truer being?

On numerous occasions I have had discussions with people following various beliefs, most people are open minded to one extent or another, others are absolute within their convictions. Even people who call themselves Buddhist, have spoken about absolutes for example, their is absolutely no God and soul, we are nothingness that is completely void of ego. As soon as you talk about absolutes, you are talking not just about ego but egotism. Is the view that absolutes are egotism? No, because again there are no true absolutes.

As I have always said, motion is an expression of our truer being, God if you like. There is nothing wrong or right within this expression, it's how we express our truer being that defines how destructive or constructive we will be. If you wish to judge destruction as being wrong or negative, this is your will but any judgment like this is of the ego, therefore a further separation from our truer being. Is there anything wrong in this separation? No but one should be wised that the further we separate ourselves from this truer being, the more egotistical we become and the more destructive we become, the world around us at present is a good indication of this.

Ego can be a beautiful thing, egotism can be an ugly thing in accordance to it's obvious destructiveness. It's wise not to judge the Ego as you do egotism, this is obvious within it's observation.
Posted by Mathew Naismith at 08:41