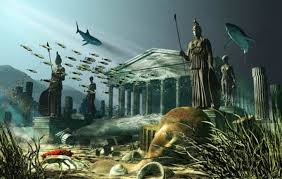 What can I say about what is going on in the world at present, it's bewildering in that it's perplexing and confusing, the world is overly complicated and it's becoming more complicated, this is too obvious. People like myself are utterly bewildered in what is going on at present, this is all due to being aware to our own past history and lives lived. The same mentality expressed thousands of years ago, is still being expressed today, and Lemuria (Mu), in the antediluvian period, is a good example of this. There is a huge difference between these two consciousness's of and Lemuria, this difference still exists today. The difference can make a person with a Lemurian consciousness feel awkward and uneasy in our present situation on Earth, this is because the Atlantean consciousness is once again in full swing in taking control of everything.

Now welcomed other influences from other consciousness's, you could relate this to creating multicultural countries as we see today in the world. did become a multi-conscious (cultural) state, this however was implemented to primarily serve the purpose of these two consciousness's in numerous ways. We might also say this of Lemuria as Lemuria was also multi-conscious (cultural), however, the Lemurian consciousness was not based on control and destruction, quite the opposite.