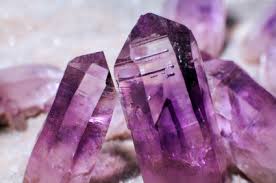 As I have pointed out a number of other times in my posts, our physical environment tell us who we are. We often ignore this as our environment isn't altogether harmonious and constructive, in other words pure, of course the ego doesn't want to relate itself to anything it judges unbecoming!! I'm going to state that crystals are an exception to this, crystals don't just show us the purity of consciousness, they are also representative of non-physical energy that is pure in essence.

I'm probably going to get myself into trouble here, crystals are an exact aspect of what a lot of people call God, an energy source that is so pure in essence that this energy seems to be the building blocks to the whole of existence. Of course as of any energy that is not controlling, conscious forms controlled by the ego can turn this energy flow into something disharmonious and destructive. Only a conscious form that is controlled by the ego can create such disharmony and destruction. No form, that is in essence of this pure energy, can express itself in this way, it's totally impossible for such forms to do so, only a consciousness being controlled can express itself in this way.

I find this quite amusing, God is representative of this pure energy in religion, in other forms of spirituality, crystals represent the same source of pure energy. When you start to perceive beyond normal human perceptions that are limited by limiting ideological  perception, you begin to piece the puzzle together.

This is where crystals come into it, they are, to me, a physical representative of pure energy that is not limited, an energy that isn't really physical at all, in actuality, just like ourselves. After certain experiences recently, I no longer perceive crystals as a physical form of energy, they now represent the purity of consciousness, or if you like, the purity of God.
Posted by Mathew Naismith at 09:12