The Illusion of Time & Space/Physicality 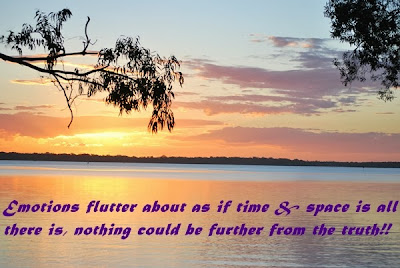 When in a oneness conscious state we see this reality being an illusion because we feel that this oneness state is who we truly are not this state of duality. Duality of course refers to time & non-duality (oneness) of no time & space believe it or not; however time & space has always existed for the main reason when in a state of no time when was time created? Time couldn’t have been created like with everything else because with no time you don’t have a starting or end point so this means that time always existed & if time always existed so did duality however in these oneness states, states of duality feel like an illusion because they are not of this oneness so we presume anything not of this oneness to be an illusion. There is also another seducing factor in this that gives us the perception of duality being of an illusion, God/creative source or consciousness. This source is of no time because it always was obviously so this has to be our true state/being!!!

The problem with this is when did duality start to exist in a conscious state/reality of no time & even space? Duality has obviously always existed as well right beside non-duality, non-duality (God) didn’t create duality (time) as it always existed as of everything however physicality itself seems to us to be an illusion & actually it is in a sense. So is this now saying duality is an illusion? No, the real illusion is thinking that physicality is all there is. By experiencing duality physicality seems to have been created in this process so this is why physicality seems to us to be the illusion, it was created by us to experience the consciousness’s knowing not just knowing of the knowing however this isn’t saying that duality is an illusion. We tend to lump duality with physicality automatically together but it’s not because we must remember nothing is new or was created within non-duality (no time).

So this all seems to be referring to anything that was created by no time (God) has to be an illusion excluding duality (time & space) but that isn’t quite true either.   Yes I believe physicality was created like anything in time & space because you can only create in time & space so physicality has to obviously be an illusion but only while one is in conscious states of duality. When we, for long periods of time, experience conscious states of non-duality (oneness) we see a different picture especially when we drop all human/non-human emotions, looking at physicality in this way we actually see that physicality, as of everything, always existed however the big difference is the physical experiences are new. Everything existed in conscious knowing even physicality but not in physical form just in its conscious form. We have a preconceived idea that to have physicality one has to be of a physical world as we know it but that’s not true, we only perceive this because that is all we understand consciously at this point in time as a species.

What this is saying is the actual physical experiences that we get from physicality is new because it was created by time & space but physicality/duality itself always existed within conscious states of no time & space. Because we still perceive in time & space, especially in a oneness states,  if we are emotional we will separate time & space from no time & space, we think they can’t possibly coexist at the same TIME. We are obviously still relating to time so we are still perceiving time exists while in these oneness states but if we go deep enough you will find time really doesn't exist but it does in the same breath. When we experience these oneness states of no time nothing is of duality so therefore we perceive that all else has to be of an illusion but illusion are of time so in fact illusions can’t exist either. This is saying our preconceived idea of an illusion is the illusion however in no time (non-dualities) illusions can’t exist, only in time (duality) can illusions exist. Why are illusions only of time & space (duality)? Illusions only exist if we have an opposite like reality & when we talk about opposites we are talking about duality & duality denotes time. This is saying we are never in a true oneness state if we are still thinking of illusions.

It is extremely difficult for any of us to perceive outside time & space, our whole perception of everything is influenced by our perception of time & space & human emotions, it’s these human emotions that also give us preconceived ideas brought on by our desire to rid ourselves of the harmful & uncomfortable attributes of what time & space give us, we then call what we no longer desire an illusion especially while experiencing oneness conscious states even if we don’t think or feel this to be the case emotionally. When we start to feel more at one it is so emotionally easy to call anything else from this feeling of oneness an illusion for the main reason it's so peaceful but of course as explained illusion can't possibly exist in a true oneness state. If you are still thinking illusions exist or anything else of duality/time & space you’re not truly at one, detach yourself from duality & go deeper & in this deepness you will find duality can exist but only in realities of duality/ time & space not in no time & space (non-duality).
Posted by Mathew Naismith at 09:52